Many people believe that farmed salmon is a health food – but is it really?

Levels of essential and healthy omega 3 fatty acids found in farmed salmon – the reason many of us eat it – have almost halved in the last 5 years (1).

And the amount of pesticides used in Scottish salmon farming have doubled since 2008 (2).

So what's going on?

And is eating farmed salmon still a healthy choice?

Salmon (and humans) have to get their omega 3 fatty acids through diet (3).

For humans these omega 3 fatty acids play a critical role in our health.

And our primary source is from oily fish such as salmon.

These fats are used by every cell in the body and are essential for immune, cognitive, heart, skin, and hormone health, as well as growth and development.

This makes the news that farmed salmon has halved in the amount of omega 3 it contains pretty important for everyone.

How do farmed salmon get their omega 3 fatty acids and why have levels halved?

Fish farming has grown significantly as an industry in recent years – in fact it’s the fastest growing animal-food producing sector.

Across the globe, the combined production volume of farmed salmon is thought to be around 2 million metric tonnes (1).

The most notable difference was seen from 2010 onwards, when the anchovy meal was replaced by plant based oils, meaning the omega 3 content in the farmed salmon is now far, far lower.

How do farmed salmon get omega 3 fatty acids?

Farmed salmon get their omega 3’s from their feed, which itself contains smaller oily fish like anchovies.

A BBC article states that around 80% of fish feed for farmed salmon used to consist of anchovy, but now it’s only around 20%.

With the change in composition of the feed, there’s been a resulting fall in the amount of omega 3 it contains – pretty straightforward right?

Peru, the world’s biggest producer of fish meal has seen prices soar this decade due to low anchovy stocks off the country’s coast (6)

Fish farms have therefore been under pressure to use less anchovy in their feed.

While global aquaculture has more than doubled in production, the total amount of fish oil used across the industry has remained the same.

This growth isn’t sustainable and the industry is struggling to obtain proportionally larger quantities of fish oil (75% of global fish oil supply goes to aquaculture, and 21% to direct human consumption (7)).

Not only that – because the anchovy has been replaced with plant based feed, this has resulted in increased levels of essential but potentially unhealthy omega 6 fatty acids in the farmed salmon.

Not great if the amount of omega 6 in your body is already too high.

Rapeseed oil is generally the fish feed alternative used in Europe (1) which is higher in omega 6’s and contains no omega 3’s, meaning there’s less in the farmed salmon on your table.

So while one portion of farmed salmon would have provided 3.84 grams of EPA and DHA in 2006, now two portions are required to match the same intake (1).

It’s not all bad news

Whilst levels of EPA and DHA in farmed salmon are on the decline, it still remains the highest source of these essential fatty acids.

And as vegetable oils in fish feed are increasing, interestingly, toxins commonly found in oily farmed fish (e.g. dioxins, and PCBs) are reducing (8).

What’s the answer for farmed salmon?

The following options are being considered by the industry;

These strategies would help to reverse the trend of decreasing levels of EPA and DHA (in farmed fish), which are so vital to human health.

But as the sustainability of food production across the globe is squeezed, there’s likely to be a downside.

Pesticides and toxins in farmed salmon

While EPA and DHA levels are still higher in farmed salmon when compared to wild salmon (12), another important factor to consider is that toxin levels in farmed salmon are also higher (13)

This is why at our Manchester clinic and personal training gym, we’ve always recommended our clients to eat wild caught salmon.

In 2012 a full list of chemicals used to control the sea lice parasite found in every Scottish salmon farm was disclosed for the first time (2).

The data showed that pesticide use in salmon farms increased each year from 188kg in 2008, to an incredible 395kg in 2011, a 110% increase, whilst in the same period, salmon production only rose by around 22%.

Environmentalists consider that the main reason for this increase in pesticide usage is due to the sea lice becoming resistant. 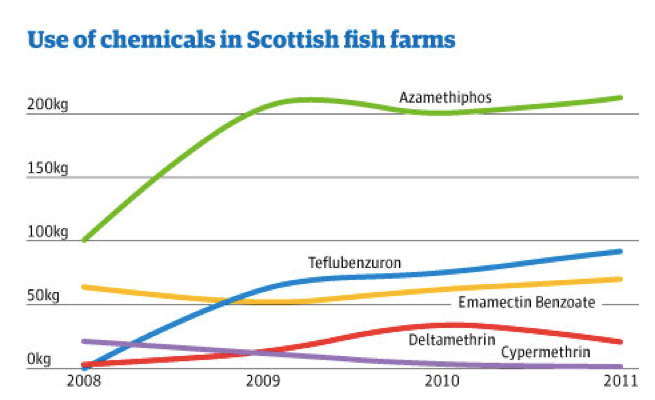 A particularly strong pesticide, azamethiphos, which can cause harm or even death to the fish at levels just slightly over what is recommended (14), makes up about half of all chemical use in Scottish farms (14).

There is also the wider implication of these pesticides on the environment, marine life and human life.

PCBs are persistent environmental toxins (they don’t degrade easily), that promote cancer and were once used as fire retardants, insulators and plasticisers, for example in electrical devices.

They are on list of chemicals for global phase-out due to the well documented side effects.

Our greatest exposure to PCBs today is through contaminated fish.

The Environmental Working Group (EWG) performed independent testing back in 2003, of farmed salmon from five countries and found that farmed salmon are likely the most PCB-contaminated protein source in the U.S food supply (16).

They claim that farmed salmon, on average, have 16 times more PCBs than that found in wild salmon (17).

These PCBs are coming from the fishmeal and fish oil that are fed to the farmed salmon.

Which is why, as fishmeal and fish oil is reduced in aquaculture and replaced with vegetable oils, the toxin levels are falling.

It would be interesting to see some current data on how the toxins in farmed salmon compare with toxins in wild salmon.

Wild Alaskan salmon don’t face the same issues – they eat Pacific Ocean fish that are naturally lower in persistent pollutants and the salmon also carry less fat (18) (which is where the toxins are stored).

And whilst we’re talking salmon – there’s a new genetically modified salmon that has been approved by Canadian health authorities.

This salmon is able to grow twice as fast as conventionally farmed Atlantic salmon.

The growth hormone gene of salmon has been tweaked with a gene from the eel-like ocean pout, which enables this accelerated growth (19).

The company behind this GM salmon are claiming that their salmon can help take the pressure off wild salmon stocks, and they’re probably right about that.

But the more we have to push the boundaries of science to meet food demand, the more a sign it is of the impact of human population growth on our fragile eco-systems and our environment.

Oh and the laws in Canada permit the sale of this GM salmon without any mention of it on the food labels (19).

From a sustainability perspective, wild Alaskan salmon is rated ‘Green / Best Choice’ by many credible environmental organisations, whilst most farmed salmon are rated ‘Red / Avoid’.

To your lean, healthy, optimised future,

How can we help you? Message us below and we’ll come right back to you…

Scroll to Top
We use cookies to ensure that we give you the best experience on our website. If you continue to use this site we assume that you accept cookies.OkPrivacy policy